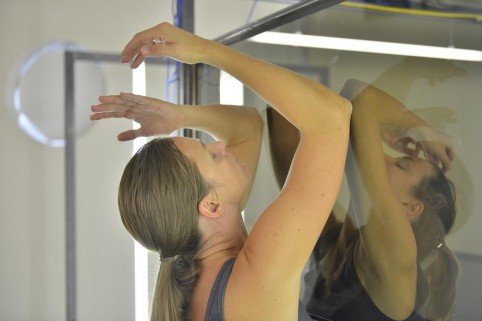 Sharings by appointment, please email to arrange via the BOOK NOW button

How can division allow for intimate encounters?

Artist Nathaniel Rackowe and choreographer Angela Woodhouse invite you to take part in an experiment towards the making of their new work (Un)touched, a performance installation to premiere  in 2016.

Un(touched) will be a diptych that explores intimacy and separation as simultaneous events. The audience are invited to inhabit two separate but related sculptures incorporating glass, fluorescent tubes and steel mesh, in a seductive process that draws an audience into a situation for which there may be a psychological or moral dimension.

For the first Nathaniel Rackowe will create a corridor- like structure that allows for multiple viewing points from outside, within, and through. The glass becomes either transparent or reflective depending on the sequencing of fluorescent lights attached to the steelwork shifting the accent abruptly from a conversation with another to the isolation with ones’ own reflection.

The second work, and for which this experiment will be conducted, presents a platform onto which the viewers are invited to walk. Submerged beneath are the   performers, whose presence is revealed depending on the shifting light.  This displacement re- articulates the relationship between the performers and audience. The work takes inspiration from South Korean artist Do Ho Suh’s piece ‘Floor’ (1997) where the visitor is invited to walk on a glass surface under which there are many small figures. This act on the work highlights a dialectic between abused power and the power of human collective action. We re-imagine this dialogue as a live event where the vulnerability of the skin’s surface elevates the body, and where a sense of precariousness is derived from the situation in which all those present find themselves.

The re – orientation of the vertical plane in the first work to the horizontal plane in the second is intended to provoke and calls to attention the ethics implicit in this new positioning that in turn desires a physical response.

Angela Woodhouse
Angela Woodhouse is a choreographer and lecturer. She teaches part time at Middlesex University. Her work focuses on the dancer as embedded within contexts and structures that demand different and multi- faceted modes of attention from the audience. She is currently collaborating with sculptor Nathaniel Rackowe on a new work to premiere in 2016.

Nathaniel Rackowe
Nathaniel Rackowe is an artist whose work is shown internationally both as large scale works and smaller gallery work. He takes inspiration from the city landscape and manipulates steel, light and carbon to reflect the city as in motion and through which we journey.