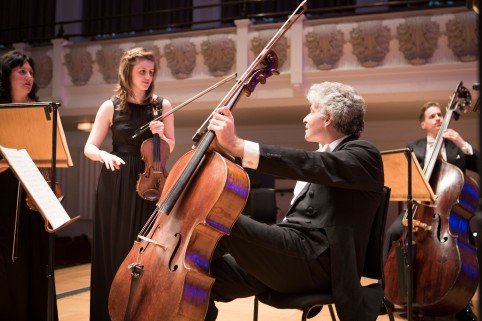 Some Things Rich and Strange

Music at Queen Mary University of London invites you to explore rare and lesser-known Twentieth Century masterworks of passionate intensity, and to delve deeper into the world of composition and performance.

This multi-dimensional event brings together members of the London Chamber Orchestra and Queen Mary University of London’s Centre for Digital Music, one of the leading music research centres of its kind in the world.

The audience can choose to explore between Arno Babajanian’s romantically pulsating piano trio of 1952, a talk and/or related film.  In the second half the audiences come together to hear members of the London Chamber Orchestra with pianist Karim Said in romantic works of Twentieth Century Vienna. The concert ends with Schoenberg’s dramatic portrayal of Napoleon Bonaparte using Byron’s text.

Composers imbue their music with secrets about themselves – their love lives, passions, fears, seeming crimes, deepest beliefs, and so much more. Dr Paul Edlin tells us about composers such as J.S. Bach, W.A. Mozart, Shostakovich, Schoenberg, Berg and Messiaen and shines another light into their creative genius.