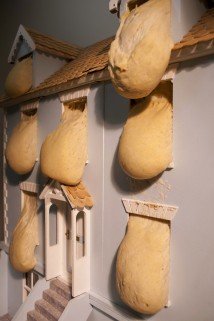 FREE, on-line registration has now closed.
SPACES MAY BE AVAILABLE ON THE NIGHT, please check on the door!

Philosopher Sacha Golob and artist Nadège Mériau discuss the concept and development of contemporary artistic practice, and some of the central themes of her work, including the idea of dwelling, the nature of claustrophobia and the dynamics of nurture.

Sacha Golob
Sacha Golob is a Lecturer in Philosophy at King’s College London – his research is principally on 19th, 20th and 21st century French and German Philosophy, focussing particularly on the self, on desire, on the boundary between thought and literature, and on objects. He is also particularly interested in contemporary visual art theory and practice.

Pennethorne’s has been shortlisted for ‘Best Restaurant or Bar in a Heritage Building’ at this year’s prestigious Restaurant & Bar Design Awards.