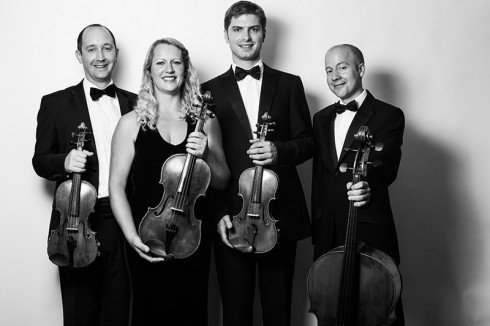 This Lunchtime Concert at London College of Music, featuring the Tippett String and Emilie Capulet (piano), will include a performance of:

For over a decade and a half, the celebrated Tippett Quartet has delighted critics and audiences alike with its animated, virtuosic performances and its inspired and attractive programming. They have performed at the BBC Proms and numerous festivals throughout the UK and abroad, including tours of Europe, Canada and Mexico. The quartet regularly appears at Kings Place, Purcell Room, Wigmore Hall, Queen Elizabeth Hall and Bridgewater Hall and frequently performs on BBC Radio 3. Alongside a busy touring schedule, the Tippett Quartet pursues a keen interest in educational work with both schools and universities and was Ensemble in Residence at Sidney Sussex College, Cambridge University for 2012-13.

Their broad and diverse repertoire highlights the Tippett Quartet’s unique versatility. They are equally at home with the giants of the classical world as they are with great Hollywood composers. Their impressive catalogue of over twenty releases have not only topped the classical charts but have also entered the pop charts and received universal critical acclaim. They have recorded for Naxos, EMI Classics, Signum, Classic FM, Guild, Real World, Dutton Epoch and Tocatta Classics.

The quartet has given numerous world and UK premieres including works by John Adams, Howard Goodall and Stephen Dodgson. 2013 saw them rediscover Gustav Holst’s Fantasy on British Folk Songs which, with the help of the eminent musicologist Roderick Swanston, they were able to complete and give a world premiere on BBC Radio 3.

They have also worked with Peter Maxwell-Davies for a performance of his 9th Quartet at the South Bank, with Anthony Payne on his Quartet No.1 for a live BBC broadcast from Spitalfields Festival, and Hugh Wood on his String Quartet No.3 at the Presteigne Festival. They have had the great pleasure of collaborating with inspirational soloists such as Kathryn Stott, Craig Ogden, Stephanie Gonley, Lawrence Power, Melvin Tan, Nick Van Bloss, Julian Bliss and Ashley Wass.

The Tippett Quartet have also performed with the Royal Ballet at Covent Garden and have premiered a newly written film score for Alfred Hitchcock’s 1927 silent film classic ‘The Lodger’.

Emilie Capulet regularly gives solo and chamber music recitals in international music festivals and concert halls in Europe, the USA, Canada and Latin America. Recent engagements include a concert tour of Holland with recitals in Amsterdam and North Brabant, a performance at the Ottawa Valley Music Festival in Ontario and a concert at the B.A.R.N. in Pontiac, Quebec, concerts in France for the European Heritage Day, recitals in the UK at Winchester Cathedral, Buxton Opera House, the Halifax Festival, the Fitzwilliam Museum in Cambridge, the Guildford International Music Festival, Cheltenham Town Hall, the Sevenoaks Festival, the Gateshead Arts Centre, The Woodville Theatre, the Clacton Arts & Literary Society and the Woodford Concert Society.

Regularly invited as guest artist on luxury cruise liners, she has performed on Cunard’s Queen Mary 2 and has led Musical Cruises on the Rhine and the Danube. She has been broadcast on BBC Radio 3, the Canadian Broadcasting Corporation Radio Canada, France Bleu Provence, and Nicaraguan television and radio. While touring Latin America, Emilie received the ‘ExpressArte’ award for her exceptional contribution to Nicaraguan culture, art and education. Emilie has recorded a CD of works by Beethoven and Chopin with BMP and is currently preparing a CD of 20th century French piano repertoire on the Toccata Classics label. As well as a Master of Music in Performance from the Guildhall School of Music and Drama, her interest in the arts as a whole has earned her an MA on Shakespeare and a PhD on the musicality of Modernist literature.

Emilie is a Fellow of the Higher Education Academy, Senior Lecturer and Head of Classical Performance at the London College of Music, University of West London.