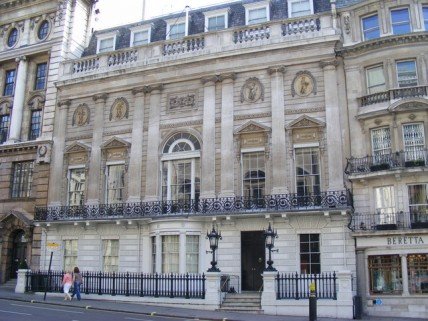 London Clubs in Literature: A Leisurely Stroll through London’s Club-land

This gentle walk will pause outside several of London’s historic Gentlemen’s Clubs, discussing both literary members and the clubs’ appearances in literature, as well as fictional clubs inspired by the real-life venues. With stops outside clubs including White’s, The Carlton, The Reform, and The Athenaeum, the tour will address the work of writers as diverse as Ian Fleming, E.M. Forster, Patrick O’Brian, and Benjamin Disraeli.

Please note that this walk will start outside Boodle’s. 28 St. James’s St. and end at The East India Club. 16 St. James’s Square.

There will not be entry to any of the clubs.

As an academic, Jeremy’s particular specialism is literary adaptation. He chairs the Association of Adaptation Studies and serves on the editorial board of its journal Adaptation. Widely published on literature-on-screen, he has also written on topics as diverse as food, body-building, Jane Austen, and Rambo. Writing is also at the core of his role as a creative. Whether it’s advising a writer on a second draft, finding time for his own work, discussing the screen potential of a literary property with an agent or publisher, or reviewing a book proposal – he has always been enthralled by the world of words. Linking his scholarly and creative interests is an enthusiasm for pursuing the ways in which written texts spin out to other media, are re-purposed, shaped, adapted.

Jeremy was Head of Media at UWL between 2002 and 2007 before taking up the post of Head of Higher Education at Writtle College where he led the College’s successful bid to obtain Taught Degree Awarding Powers. In 2013 he returned to UWL to take up a Professorship.