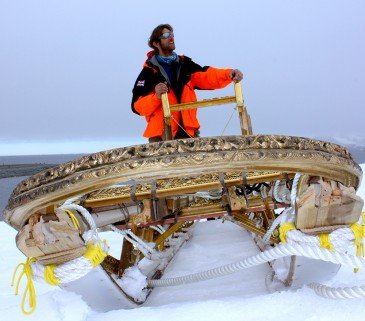 SOMETIMES, IT’S VERY DIFFICULT TO JUSTIFY YOUR POSITION MAKING ART WHILST EVERYONE AROUND YOU IS TRYING TO SAVE THE PLANET.

And then Chris came along to make some Art.

For three and a half months Chris lived and worked alongside the folks at the British Antarctic Survey. He discovered that sometimes it’s very difficult to justify your position as an Artist whilst everyone around you is a Hero.

This is a recently reworked, power-point presentation-come-adventure story about overcoming hardships and celebrating difference via tales of carnivorous ducks, Ladybird books and a sledge built out of gold picture frames.

Antarctica is created by Chris Dobrowolski and produced by Artsadmin.

Chris Dobrowolski is an artist and maker who works from his garden shed in Colchester, Essex. He studied Fine Art in Hull but, when he arrived, he built a boat from driftwood to try to escape. Chris has since ended up making a whole series of working vehicles in a similar vein, including a tank, a hovercraft, an aeroplane and a sledge. Each vehicle and escape attempt has its own story attached. Over the years, Chris has retold and refined these stories as both an artist and teacher.

His performance work includes the acclaimed All Roads Lead to Rome and Poland 3 Iran 2 with 30 Bird Theatre about the 1976 cup match final. He has recently had his first book published: Escape (Jardine, 2014).