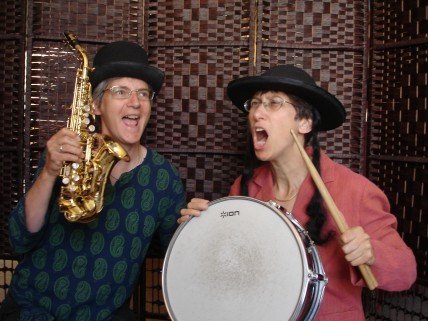 Katsha’nes! Cockney-Yiddish music hall from the past and the present

Join us for an evening of  lively rhythms, catchy tunes and witty narrative, as Katsha’nes breathes irresistible life into the golden age of the London Yiddish Music Hall.

Yiddish was the language of Eastern European Jewry.  In the height of the music-hall era, immigrant songwriters described their experiences in humorous, moving, feisty and irreverent Yiddish songs.

The songs Katsha’nes perform come from archive songsheets and songbooks, produced at the time that they were sung in Whitechapel’s York Minster and Wonderland music halls. Some songs have known melodies, some lyrics are sung to original music composed by the band. The songs give us glimpses of an impoverished, energetic and conflicted community in a state of flux, trying to acculturate to their new home with a new culture without losing their identity.

This theatrical multimedia performance does not require any knowledge of Yiddish – though you can expect to retain a few words to hum to the catchy melodies on your way out.

The performance will begin with an introduction to the world of the Anglo-Yiddish music halls, followed by a romp through a range of the songs. At the end of the concert there will be an opportunity to ask questions of the band who include the doctoral student researcher, composers and arrangers.

Vivi has been singing Yiddish songs about London for the last decade and is currently in the final year of a PhD at Royal Holloway on Yiddish popular culture in London before the First World War. She is the singer with Klezmer Klub, an experienced teacher, has lectured internationally and leads East End historical tours in song.

Rachel has worked as a theatre director and teacher. In 2006, she founded the Belsize Klezmer Ensemble. Author of articles and anthologies, she was Editor of the Jewish Quarterly for seven years.

Sarha is a saxophonist specialising in performing popular music from around the world, particularly in street bands. Her performances include that of klezmer, Indian, African, Latin American and jazz musics at celebrations and celebratory processions around the world. She has just completed a PhD in world music studies.

Rebekka studied composition at the Guildhall School, London, and in Jerusalem. She has a body of vocal works, acoustic and electronic, reflecting her interest in music theatre. She explores the themes of cultural memory and identity, disruption and fragmentation, both as composer and singer/pianist. She teaches, directs and performs.

Refreshments:  A cash bar will be available.
Access: Unfortunately there is no disabled access at this venue

This event is funded by the Humanities and Arts Research Centre, Royal Holloway.