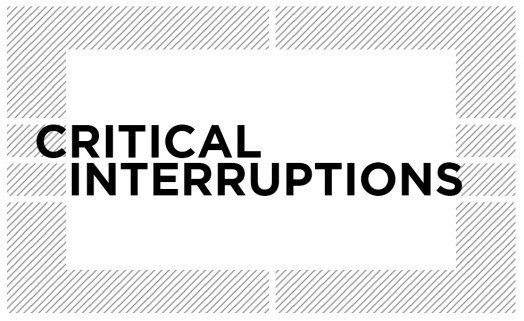 FREE. Drop in, but you can also book in advance.

How can criticism respond to new performance practices?

How do performing arts professionals view its role?

Who needs it and why?

Functioning as a lightly moderated public forum, Critical Interruptions is an open roundtable that investigates key issues surrounding criticism and sets the debate within a distinct public space.

Critical Interruptions has invited critics, artists, producers, programmers and policy-makers to respond to the topic with a brief provocation. Members of the public are invited to take part in the unfolding conversation. There will be spare seats around the table alongside the contributors: sit down, join the conversation, bring thoughts and questions, and leave the table when you wish to. You are also welcome to attend to observe the conversation.

If possible, please register your interest by booking a ticket.

Diana Damian Martin is Lecturer in Performance Arts at Royal Central School of Speech and Drama. She is co-founder of Writingshop, a long term collaborative project with three European critics examining the processes and politics of contemporary critical practice and Institute of Critical Practice, a nomadic [non] organization that aims to explore the ways in which criticism currently manifests itself in contemporary performance as a mode of inquiry and production, strategy for visibility and practice of dissemination. She has published extensively for both print and online in the UK, France, Belgium, Germany, Czech Republic and Romania and is completing her funded doctoral project: Criticism as a Political Event at Royal Holloway, University of London.

Bojana Jankovic is the Performance Co-Editor for Exeunt and 1/2 of There There, a performance company. Negotiating making with writing, she remains focused on the social, political and economic contexts theatre and performance stem from. She previously wrote for Teatron in Belgrade; her work has hung on the walls of the Museum of London and has been performed around the UK.

More on Critical Interruptions:
Critical Interruptions is a 3-year project that aims to open up a wide, cross European conversation on performance criticism, its strategies, language and forms. The project devotes time to the subjects such as positioning, sustainability, formal developments, engagement, objections and difference, taking the discussions into distinct public spaces.