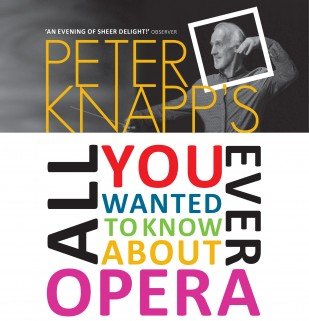 All You Ever Wanted To Know About Opera!

A magical evening of beautiful music and abundant laughter.

Peter Knapp takes you on a hilarious and harmonious journey through the wonderful world of opera and draws on his rich and remarkable experiences to bring you the divas, the dramas and the unforeseen disasters. Stunning singers and his virtuoso orchestra offer some of opera’s most memorable and melodious moments and you are invited to join in yourselves in a medley of rousing opera choruses, skilfully trained by the maestro.

Peter Knapp
After Cambridge, Peter Knapp continued his singing studies in London and Italy, making his solo debut at Glyndebourne. He went on to sing over 40 major baritone roles at home and abroad, including Don Giovanni at the London Coliseum and Orfeo at the Maggio Musicale in Florence.  Keen to take opera to a wider audience, he set up his own company which toured extensively throughout the UK and France and which brought seasons to Sadlers Wells and to the South Bank and Barbican Concert Halls in London. He teaches at Trinity Laban Conservatoire of Music and Dance and at the University of the Arts.