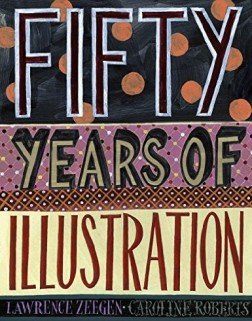 Lawrence Zeegen, Dean of the School of Design at London College of Communication, presents 50 Years of Illustration alongside a major exhibition.

The lecture and accompanying exhibition charts contemporary illustrations’ rich history: the rampant idealism of the 1960s, the bleak realism of the 1970s, the over-blown consumerism of the 1980s, the digital explosion of the 1990s, followed by the increasing diversification of illustration in the early twenty-first century. The event explores the contexts in which the discipline has operated and looks historically, sociologically, politically and culturally at the key factors at play across each decade, whilst artworks by key illustrators bring the decade to life. Contemporary illustrations’ impact and influence on design and popular culture are investigated through introductory essays and profiles of leading practitioners, illustrated with examples of their finest work.

The talk will be followed by a preview of the exhibition, book signing and drinks reception.

Professor Lawrence Zeegen is an educator, illustrator and writer. As the Dean of the School of Design at London College of Communication, Lawrence leads undergraduate and postgraduate courses in graphic and communication design, illustration and visual media, interactive design, typographic design and design management and context.

Previous posts include Head of Design School at Kingston University and Academic Programme Leader, Communication Art and Design at University of Brighton. Lawrence has lectured at conferences and institutions and has acted as a design education consultant nationally and internationally.

Having worked as an illustrator since graduating with BA (Hons) Graphic Arts (first class) from Camberwell College of Arts and MA Illustration from the Royal College of Art, Lawrence’s clients have included major newspapers, magazines, book publishers, design companies and advertising agencies. Lawrence has been a regular contributing illustrator for The Guardian newspaper since 2005.

Lawrence was a founding partner of London-based illustration studio Big Orange, a founding director of Heart, and in 2006 he launched AgencyRush before departing to take a more active role in design education.

As a design writer, Lawrence has contributed to numerous publications including Creative Review, Grafik, MacFormat, The Journal, Varoom, Digital Creative Arts, Computer Arts and is a regular lead contributor to Computer Arts Projects.

In 2011 Lawrence was appointed to the Executive Board of the International Council of Graphic Design Associations (ICOGRADA).