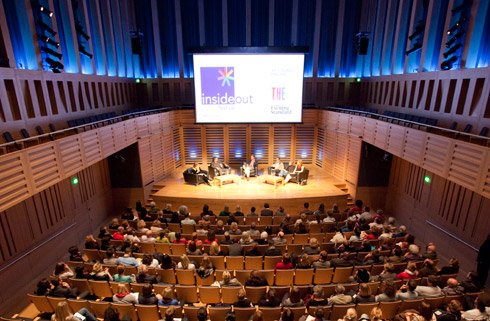 In a cross between “Question Time” and “University Challenge” a panel of academics chaired by ubiquitous quizmaster Bamber Gascoigne will respond to the audience’s questions on life, the universe and everything!

Bamber Gascoigne is best known as the quizmaster for twenty-five years of University Challenge, which he hosted from its launch in 1962. But the central part of his professional life has been as an author of books and television documentaries.

He has published three novels and several children’s books, illustrated by his wife, Christina, but most of his books have been on widely ranging historical subjects. A particular interest has been the history of prints, resulting in Milestones in Colour Printing and How to Identify Prints, now a standard textbook in colleges and museums. His Encyclopaedia of Britain covers all the best-known aspects of British history and culture.

Since 1994 he has been writing a digital history of the world for the internet. It went online in 2001 as www.historyworld.net and in 2002 won the New Statesman New Media award as Britain’s best educational website. In 2007 he launched a related site, at www.timesearch.info, using timelines as a way of searching the internet.

Shahidha Bari works in the fields of literature, philosophy and politics, with special interests in the Romantic period and the ideas of ethical subjectivity that emerge from it.  Her current research examines the idea of interiority that emerges from Romantic writing, and specifically considers the legacy of the Romantic engagement with Islam and the East, through an exploration of early English translations of the Arabian Nights, nineteenth-century Islamic art and the British literature of Romantic Orientalism. Her first book, Keats and Philosophy explored the range of Keats’s poetic mediations on friendship, mortality, nature, travel and war.

She writes about architecture and modern art, is a co-founder of the intellectual salon, How to Live and is one of ten AHRC BBC Radio 3 ‘New Generation Thinkers’ selected in 2011.

David Berman is a theoretical physicist from Queen Mary, University of London. His physics education was in Manchester, Brussels, Durham and CERN. He has worked as a researcher at the Universities of Utrecht, Jerusalem and Cambridge where he was a fellow of Clare Hall. His speciality is M-theory, the frontier of unification in fundamental physics. In recent years he has also been involved with a variety of projects with artists where the extraordinary conceptual leaps in theoretical physics are brought into the artist realm. His current research is on extending and generalising the ideas of general relativity to reformulate string theory.

Ben Quash grew up in County Durham and Monmouthshire. He read English as an undergraduate at Cambridge, and then (as a second degree, whilst in training for ordination at Westcott House) theology. Doctoral work on the theological dramatic theory of Hans Urs von Balthasar combined these literary and theological interests. He was Chaplain and Fellow of Fitzwilliam College, Cambridge, and a lecturer in the Cambridge Theological Federation from 1996-1999, then returned to Peterhouse as Dean and Fellow until he came to King’s as Professor of Christianity and the Arts in 2007.

From 2004-2007 Ben Quash was also Academic Convenor of the Cambridge Inter-Faith Programme in the University of Cambridge’s Faculty of Divinity, developing research and public education programmes in Judaism, Christianity and Islam and their interrelations – and indulging a delight in Scriptural Reasoning.

Simon Wessely is Professor and Head of the Department of Psychological Medicine and Vice Dean for Academic Psychiatry at the Institute of Psychiatry (IoP), King’s College London. He is best known for his work on unexplained symptoms, syndromes and military health.

He founded the King’s Centre for Military Health Research, a unique collaboration between the IoP and the KCL Department of War Studies, founded in 2003. Its flagship project, a large-scale ongoing study of the health and wellbeing of the UK Armed Forces, has had a direct impact on public policy and on forms of treatment and help for Service personnel.

A graduate of the universities of Cambridge, Oxford and London, he obtained a Master’s and Doctorate in epidemiology.  Professor Wessely has been a consultant liaison psychiatrist at King’s College Hospital and the Maudsley Hospital since 1991. He became Director of the Chronic Fatigue Research Unit at King’s in 1994 and of the Gulf War Illness Research Unit in 1996. He is Civilian Consultant Advisor in Psychiatry to the British Army and a member of the Defence Scientific Advisory Council.