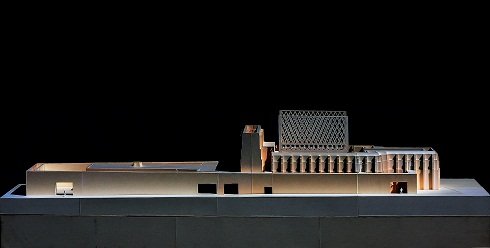 Presented by the London Shakespeare Centre

The aim of this exhibition is to chart the extraordinary history of an Elizabethan-style Polish theatre from its beginnings in 17th century Gdansk to today.

Take a journey through time and witness the transformation of the Gdansk ‘Fencing School’ where English travelling troupes staged early modern English drama, into its 21st century modern reconstruction, the Gdansk Shakespeare Theatre, which will open its doors in 2013.

The project engages with the past and looks into the future with its remarkable design by Italian architect Renato Rizzi. The new theatre will not be a monument or a piece of reconstructed heritage. It will become a living theatre open not only to ideas from all forms of theatre but also all forms of culture from around the world.

Renato Rizzi designed a multifunctional building, alluding to the Elizabethan theatre tradition but also a contemporary centre for culture in Gdansk, a bridge closely connecting history and modern times and thus the theatre’s form will not become prematurely and dramatically anachronistic but will age gradually and naturally together with the city.

On the 13 October there will be a discussion panel and the official opening of the exhibition.

The exhibition will be accompanied by several guided tours taking place across the two weeks. Further details to follow.