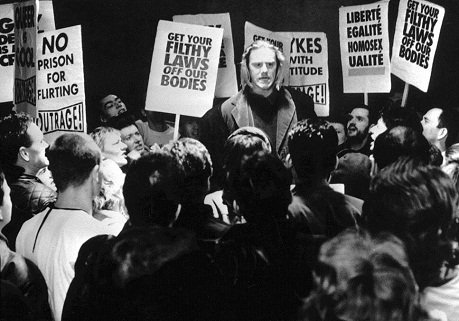 Derek Jarman’s Edward II is a postmodern take on the life of the medieval monarch, based on Christopher Marlowe’s play. The backdrop for Jarman’s film is the introduction of Section 28 (the law against “promotion” of homosexuality by local authorities) and the film shows Edward lead the attack against his queen with an army of gay-rights protestors.

This screening will reconsider the film in the context of the current debates around queer history and LGBT rights. One reason for the timeliness of this event is the current debate around the legalisation of gay marriage: as clerics and conservatives evoke ideas of the ‘sanctity’ and ‘history’ of marriage, we will ask what looking at histories of sexuality can really tell us about the present.

Jarman’s film proposes a queer look at history. This challenges both our understanding of the past as possible to film and narrate, and received ideas of heterosexuality and marriage as traditional, historic institutions.

Juliet Jacques is a freelance journalist who writes for the Guardian, the New Statesman and Time Out and elsewhere. She covers gender, sexuality, literature, film and sport.

Richard Maguire is Lecturer in Modern English Literature at Arcadia University and convener of the MA course on Representations of Sexuality at the Turn of the Century at King’s College London. His PhD thesis, ‘The Last of the Queer Romantics: Mourning and Melancholia in Gay Men’s Autobiography’, looked at the work of Jarman, Franko B and David Wojnarowicz.

Co-sponsored by CLAMS and Queer@King’s.