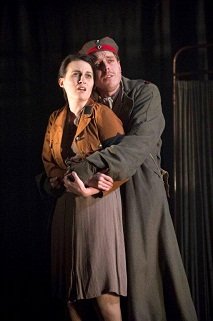 Tickets available on the door.

This season English Touring Opera’s national tour presents an exciting new production of Viktor Ullmann’s brilliant work, The Emperor of Atlantis, which was composed and rehearsed at Terezín concentration camp in 1944 before the composer was sent to his death at Auschwitz. As part of a wider exploration of music from this time, Paula Sides (soprano) and Jonathan Gale (piano) celebrate the life and lesser-known works of this extraordinary composer. This recital is a study of Ullmann’s life and work, as reflected in a selection of the many songs he wrote throughout his tragically short career.

Originally from Tennessee, Paula Sides studied opera at the Royal College of Music, where she received the Tagore Gold Medal. Jonathan Gale studied music at Cambridge University before studying as a conductor at the St Petersburg Conservatoire and as a repetiteur at the Guildhall School of Music and Drama. Together they have been finalists in the Young Concert Artists Trust competition at the Wigmore Hall.

Erik Levi is professor of music at Royal Holloway, University of London. He is author of two books on music in the Nazi period, Music in the Third Reich and Mozart and the Nazis,  and has also recently  co-edited  a book entitled Music and Displacement. An experienced professional accompanist who has recorded for the BBC and for Nimbus Records, he also writes regularly for the BBC Music Magazine.

Robert Eaglestone is Professor of Contemporary Literature and Thought at Royal Holloway, University of London. He works on contemporary literature and philosophy, and in Holocaust and Genocide studies. He is Deputy Director of the Holocaust Research Centre there.

He is the author of four books, Ethical Criticism (1997), Doing English (3rd ed 2009), Postmodernism and Holocaust Denial (2001) and The Holocaust and the Postmodern (2004), and has one, Contemporary Literature (2013) forthcoming. He is the editor of five books including Teaching Holocaust Literature and Film (2008) and Derrida’s Legacies (Routledge 2008). He is the Series Editor of Routledge Critical Thinkers. His work has been translated into five languages.

BOOKING HAS NOW CLOSED FOR THIS EVENT BUT TICKETS ARE AVAILABLE ON THE DOOR.

English Touring Opera is offering 4 lucky individuals and their guest the chance to watch the final dress rehearsal of ETO’s 2013 spring season production of Mozart’s Cosi fan tutte, at Hackney Empire on the evening of the 27thFebruary 2013.  There will also be the opportunity to meet with a member of the creative team.  For your chance to win this unique evening answer this question:-

Please email you answer to ideas@tcce.co.uk.  Please head your email “ETO Competition” and put the answer in the body of your email.