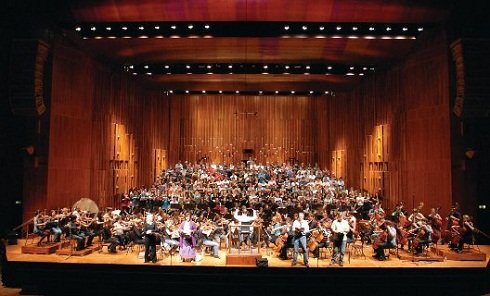 Movers and Shakers – Should audiences at classical concerts respond to music by moving?

Some audience members describe attending classical music concerts as a stifling and inhibiting experience by contrast with other types of music. Is there a way of creating space at classical concerts for audience members to move during the performance? Researchers John Sloboda and Melissa Dobson join with conductors John Landor and  Christopher Gayford to present research findings and reflections on a  pilot classical music movement workshop, and open up a debate about  audience behaviour at classical concerts.

Professor John Sloboda is Research Professor at the Guildhall School of Music & Drama where he directs their “Understanding Audiences” research programme, and works with the “Engaging London’s Audiences” strand of CreativeWorks London, the AHRC Knowledge Exchange Hub for the Creative Industries.  John is internationally known for his work on the psychology of music, and is author of over 150 publications on this topic.

His latest book is the “Handbook of Music and Emotion” co-edited with Patrik Juslin and published in 2010.

Melissa Dobson is a post-doctoral Research Assistant at the Guildhall School of Music & Drama, where she is working on projects on the themes of orchestral musicians in the twenty-first century and understanding audiences. She received her PhD from the University of Sheffield in 2010, with a thesis investigating audience experience and enjoyment of classical music concert attendance. Her research interests lie broadly in the social psychology of music, with a particular focus on audience and performer perspectives on live music-making.