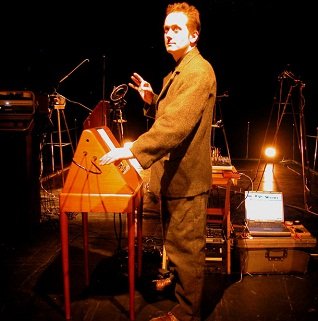 TCCE has partnered with Kinetica to secure a 40% reduction on the price of tickets for the Monday afternoon performance session on 29th October. Click here and enter the promocode “TCCE” to pick up tickets for just £6 instead of the normal concessions price of £10 for the performance at 3pm on Monday 29th October.

STUART WARREN HILL / IVAN BLACK – present a new Holographic kinetic experience AV pioneer and innovator Stuart Warren Hill (Holotronica / Hexstatic) combines live electronic music with realtime visual synthesis delivered using the latest Holographic and 3D technologies. He will be presenting a new performance in collaboration with artist Ivan Black, who creates complex kinetic sculptures. These physical forms expand and contract like fractals stretching from the infinitesimal to the infinite. The audience will be provided with stereoscopic glasses for this evolving and captivating performance that will blur the boundaries between the virtual and the real.

DAVID OGLE – David Ogle’s sculptural work aims to take the fundamental properties of drawing and transfer it into new spatial situations. Physical space is intersected by line and form as if a virtual object is dragged into a physical space. Ogle will be creating a new site-specific installation for Kinetica at Village Underground.

This event will include all the performances listed above and extend to a lavish dinner and auction of Kinetica artists works. Proceeds from the auction will go towards the support of Kinetica Museum, a not-for-profit organisation which produces Kinetica Art Fair.