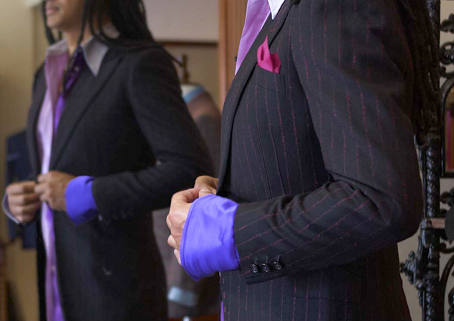 Each exhibitor has won acclaim in their respective fields: sculpture, tailoring, painting, filmmaking and advertising. They are also all alumni from colleges within the University of the Arts, London (UAL) – Europe’s leading arts and design education institution. And, of course, they all just ‘happen to be’ black, too.

Uniting the art colleges Central Saint Martins, Chelsea, Camberwell, Wimbledon, London College of Fashion and London College of Communications, UAL is located in perhaps the world’s most ethnically diverse metropolis, and are proud to reflect that diversity in students, staff and curriculum. They are particularly proud that many black alumni have achieved the type of stellar success represented in this show.

But they are also keenly aware that, like most Higher Education institutions in Britain, UAL needs to raise the average level of degree attainment among our black and minority ethnic students, which is significantly lower than that of white UK students. To that end, UAL has a range of initiatives aimed at correcting this imbalance.

‘Happening To Be’ is just one element in our broader strategy, and is an initiative of the ‘Shades of Noir’ project (www.shadesofnoir.org.uk) which runs a range of staff, student, curriculum development, and creative & cultural sector industry engagement programmes. UAL and the program creator Aisha Richards believes that greater awareness of the sheer breadth and brilliance of black achievement across the arts will help to raise expectations and broaden horizons. Just as the artist’s represented in this show have dedicated their lives to excellence in their work, so UAL is committed to providing higher education that thrives on diversity, equality and ambition.

Yinka Shonibare MBE (1962) will display a macquette of his ‘Nelson’s ship in a bottle’, which, as the 2010 fourth plinth commission, was one of the most high-profile, and well-received works of contemporary art exhibited in recent years. Also on show will be his 2005 short film ‘Odile and Odette’, demonstrating that, not only is he a brilliant master sculptor, but that he also has a sublime approach to the moving image. Born in London to Nigerian parents, Shonibare was raised in Lagos. He later returned to the UK where as well as attending Goldsmiths for his MFA, he also studied at Byam Shaw College of Art, which is now part of Central Saint Martins, UAL.

Professor Andrew Ramroop OBE (1952) is the managing director of Maurice Sedwell in Saville Row, London, and is renowned as one of Britain’s most highly respected master tailors. He will show examples of his incredible craftsmanship and design acumen – which, for more than thirty years, has been dressing men of good taste and flair in the finest cloth. Born in Trinidad and Tobago, the young Andrew attended the London College of Fashion to pursue his ambition to become a tailor. He is now an honorary professor at UAL and has a well-established record for promoting educational excellence in fashion and tailoring, not for the many young women and men he has apprenticed down the years.

Professor Ablade Glover OBE (1934) is still creating astonishing paintings in his late seventies and we have the pleasure of presenting his remarkable vision for this exhibition. During a long and distinguished career as an international exhibiting artist and leading educator, Professor Glover rose to become the Dean of the College Art at the Kwame Nkrumah University of Science and Technology, one of the top higher education institutions in his homeland of Ghana. During the pursuit of his own education, the young artist attended what is now Central Saint Martins College of Art and Design, UAL.

Ngozi Onwurah (1966), of white British and black Nigerian heritage, was born in Newcastle-Upon-Tyne. She will show examples of the short films that first marked her out as a director of searing integrity and poetic vision, exploring the psychological dilemmas that emerge from the contradictions of body image, race and gender identity. The youngest of our exhibitors, she is probably best known for her acclaimed 2006 BBC drama ‘Shoot the Messenger’, which won that year’s Prix Italia as well as two BAFTAs. Ms Onwurah attended Central Saint Martins during the 1980s, where she studied film.

Trevor Robinson CBE (1964) Born in London to Afro-Caribbean parents, this multi-award-winning creative director and philanthropist has had a long and fascinating career in the ultra-competitive world of screen and print advertising. Before setting up his own production company, Quiet Storm, he won industry plaudits for the ‘viral’ Tango soft drinks ads. For ‘Happening to be’ Trevor contributes several of his humorous, stylish works. He remembers with fondness his pre-degree studies at Chelsea College of art and design.

Please be aware that this exhibition runs from 10 September to 27 October 2012.