‘Death and the Contemporary’ is a series of site-specific events organised by Dr Georgina Colby and Anthony Luvera that will take place across the capital in October 2012. Panel discussions with keynote philosophers, writers, visual artists, and theorists will provide an exciting interdisciplinary forum in which to consider issues surrounding the representation of death in contemporary culture. Audience members will have the opportunity to engage and contribute to these stimulating conversations with leading figures across the disciplines.

The first event, ‘Death and Space’, is scheduled to take place at the Dead House, Somerset House, on October 23rd, 2012. Confirmed panellists include Professor Robert Hampson and Tom Hunter.

A glass of wine in included in the ticket price.

Tom Hunter is an internationally acclaimed artist whose medium is photography.

Tom graduated from the London College of Printing in 1994. His degree show, The Ghetto, a series of photographs and a model of his squatted neighbourhood, is now on permanent display in the Museum of London. Tom received an MA at the Royal College of Art, where, in 1996, he was awarded the photography prize by Fuji Film for his series Travellers. Tom has exhibited nationally and internationally at venues such as the National Gallery, London, where he held the first solo photography show; the Saatchi Gallery; White Cube; and many others.

Robert Hampson is Professor of Modern Literature at Royal Holloway, University of London, where he is Director of the MA in Literatures of Modernity and teaches on the MA in Poetic Practice. He has published widely on Conrad, Ford, and contemporary poetry. His recent publications include Frank O Hara Now (2011; co-edited with Will Montgomery), Conrad’s Secrets (2012), a volume of poetry, An Explanation of Colours (2011) and the Crater Press pamphlet, Out of Sight (2012).

Dr Andrea Brady is Senior Lecturer in early modern and contemporary English literature at Queen Mary University of London, where her research interests include poetry, ritual, embodiment, dreams, theories of the imagination and the material conditions of writing. Her books of poetry include Wildfire: A Verse Essay on Obscurity and Illumination (Krupskaya 2010) and the forthcoming Mutability: Scripts for Infancy (Seagull 2012).  She is co-publisher of Barque Press and director of Archive of the Now.

Professor David Bate is a photo-artist and theorist. Recent works includes the books Zone (Artworks, 2012), Photography: Key Concepts (Berg, 2009) and Photography and Surrealism (IB Tauris, 2004). He is currently a Professor of Photography at the University of Westminster, London and co-editor of Photographies journal. 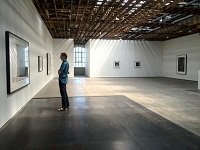 Please be aware that this event has now sold out.