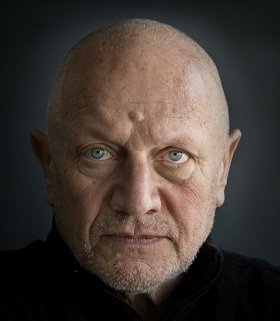 As part of a series of Culture Now talks honouring mavericks in film and theatre, Geoffrey Colman joins Steven Berkoff for this lunchtime conversation.

An acclaimed English actor, playwright and director, Steven Berkoff is best known for his scintillating performances and often villainous roles, both on stage and screen.

Born in Stepney in 1937, he studied drama in London and Paris before moving on to perform within several repertory companies. Since forming the London Theatre Group in 1968, Berkoff has produced many adapted and original world touring plays, including: Kafka’s Metamorphosis and The Trial, Poe’s The Fall of the House Usher and his own stage works, East (1975), Decadence (1982) and West (1985). He has directed productions of Shakespeare’s Coriolanus and has played title roles in Hamlet, Macbeth and Richard II, as well as Oscar Wilde’s Salome.

In addition to his contribution to theatre, Berkoff has worked extensively in film; appearing in titles such as A Clockwork Orange, Beverly Hills Cop, and perhaps most notably, James Bond’s Octopussy. He is the author of multiple works of non-fiction, and as well as his own autobiography, Free Association (1996), he has published several texts in relation to theatre including: Meditations on Metamorphosis (1995), Tough Acts (2003) and more recently, Tales from an Actor’s Life (2011). His latest book, Steven Berkoff One-Act Plays, is published by Methuen Drama in September 2013 and collects together nineteen previously unpublished one-act plays.

An Associate Master of the Theatre Royal Haymarket and features writer for The Stage, Geoffrey Colman is currently Head of Acting at the Central School of Speech and Drama. As a freelance director and acting coach his career has combined work in opera, theatre and film/TV. In this diverse field he has worked with playwrights, composers, actors and singers (and holograms of actors) from various performance contexts ranging from writers at the National Theatre of Finland and Institut del Teatre Barcelona, to actors with Miramax Films, models on Britain’s Next Top Model, the comedian Lenny Henry and the award winning international Transglobal Underground recording artist Natasha Atlas.

Steven Berkoff will be signing copies of his book One-Act Plays in the ICA Bookshop following the talk.