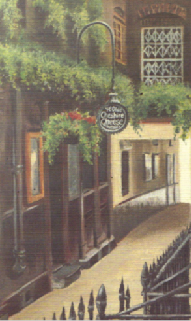 ‘Conrad’s Secrets: London and its Others’

Join Professor Robert Hampson of Royal Holloway, University of London, at Ye Olde Cheshire Cheese pub on Fleet Street for a drink and a talk based around his new book, “Conrad’s Secrets”.

Ye Olde Cheshire Cheese is a Fleet Street landmark. Rebuilt back in 1667, it has strong connections to Conrad and his work. You can find a map and directions here.

This is a free event and we will provide a glass of wine, beer or a soft drink. However booking is essential as numbers are limited.

Robert Hampson is Professor of Modern Literature at Royal Holloway, University of London, where he is Director of the MA in Literatures of Modernity. He has published widely on Conrad, Ford, and their contemporaries. He has published three monographs on Conrad: Joseph Conrad: Betrayal and Identity (1992), Cross-Cultural Encounters in Joseph Conrad’s Malay Fiction (2000) and Conrad’s Secrets (2012) and co-edited Conrad and Theory (1998). He is a former editor of The Conradian, and he has edited various works by Conrad including Heart of Darkness, Lord Jim, Victory and Nostromo. He has just edited the Conrad/Ford collaboration The Nature of a Crime for ReScript Books.

The lovely people at Palgrave Macmillan have donated 2 copies of Robert Hampson’s wonderful new book worth £55 each as prizes.   You can see more details about the book here.

The first 2 correct answers to the question ‘What was Joseph Conrad’s original name?’ drawn at random by Robert after his talk on the 27th October will receive a copy of the book.  Please email your entry to ideas@tcce.co.uk heading your email ‘Palgrave Macmillan Conrad’s Secrets Competition’.  Entries will be accepted until 12 noon on Friday 26th October, entries received after this time will not be included in the draw.  Winners will be notified via email during the week of 29th October.